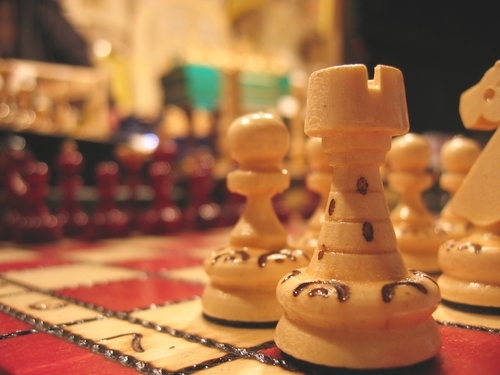 The earliest known chess pieces were discovered in 1977 in Afrasiab, an ancient site near the city of Samarkand, located in modern-day Uzbekistan. The spectacular discovery was made by Jurjij F. Burjakov, an archaeologist and historian who had been part of a major excavation project carried out by the Uzbekistan Academy of Archaeology.

The history of chess can be traced back almost two and a half millennia, but its earliest origins remain shrouded in mystery, tantalizing historians and chess aficionados alike. It is generally believed that the ‘game of kings’ first originated in India sometime before the 6th century, after which it soon spread to Persia, Turkey, and the Middle East.

Samarkand, where Burjakov made his discovery, is considered one of the oldest inhabited sites in the world. Situated on the historical trade route linking China and the eastern Mediterranean region (the famous ‘Silk Road’), the city has achieved prominence several times throughout its long history as one of Central Asia’s greatest metropolises.

Delicately made from ivory, the seven Afrasiab chessmen are currently housed at the State Museum of Samarkand. It is generally believed that all seven pieces were made sometime between the late 6th and early 8th centuries. The chessmen are exquisitely crafted, reminding modern art historians of the grace and style found today in Alessi kitchenware or the imperial collections by Faberge.

The seven chessmen, all of which are heavily worn (indicating considerable use), are small, ivory carvings depicting soldiers and contemporary battle equipment. The fact that they are all representational in shape (rather than abstract) strongly suggests that they predate the introduction of Islam to the region in the mid-7th century.

The chessmen consist of two foot-soldiers (pawns) bearing shields and short swords; a war elephant (bishop) with a rider in battledress; a vizier (queen) with two horses; two mounted riders with sword and shield (knights); and a Shah (king) on a three-horse chariot.

According to most art historians, the chessmen were most likely made during the latter days of the Sassanid Empire (224-651 AD) sometime before the Arab conquest of Persia.

Computers that are Ideal for Chess